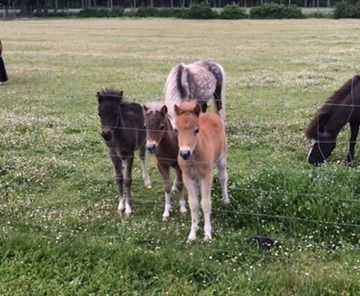 May Case of the Month: Minis!

Spring is always associated with newborn foals. This May, seemed a little unusual in that we saw so many mini foals. I don’t think there is anything cuter than a fuzzy 15-25 lb mini foal that you can literally pick up like a small dog. Each foal has a unique story:

XXXX was the first miniature foal born in our practice from artificial insemination. She was a giant, with the tallest, straightest legs, we have ever seen in a newborn.

YYYY born the next day, unfortunately had tendon laxity, and did not have straight legs initially. He had to be confined for a few weeks until the tendons strengthened, before he could be let out. He hated confinement and bounced off the walls, driving his mother crazy.

ZZZZ came a little early and initially showed symptoms of diarrhea and electrolyte imbalance. We were concerned with a possible ruptured bladder and was monitored very closely for the first week. Luckily the bladder healed on its own and surgery wasn’t needed.

AAAA had trouble figuring out where the milk came from and we were concerned he suffered from mild ‘dummy syndrome’. We were able to avoid impending serious complications with the quick actions of the owner, collecting the colostrum, tube feeding the foal and applying the Madigan Foal Squeeze Technique. After the squeeze, AAAA immediately got up, went to the teat, and nursed.