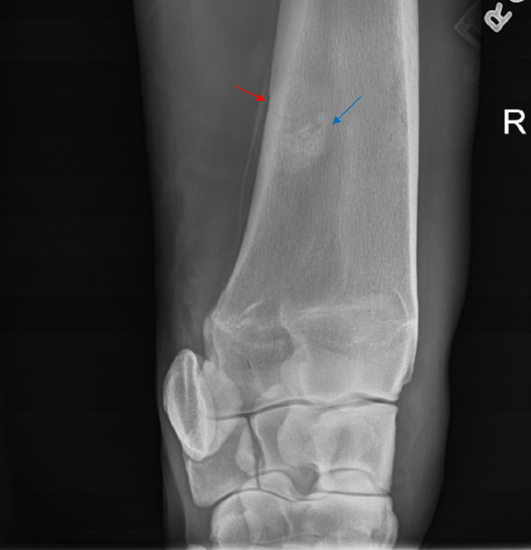 October Case of the Month: A Worsening Lameness

Marvin is a seasoned show horse who competes in the hunter/jumpers. In regular turnout one day, Marvin was noted to be kicked in the front leg by another horse. At the time he was only mildly lame with no swelling. There was a small wound which was kept clean, Marvin was given some Bute, and he was presumed to have gotten off easy. Over the next several days, Marvin was noted to be lame at a trot and have some soft tissue swelling on the inside of the leg above the carpus. He was seen for veterinary care and there appeared to be some local infection around the site of the kick wound. Marvin remained lame only at a trot and would fully weight bear on the leg. He was started on antibiotics for the infection, continued on anti-inflammatories, and a plan was made to perform radiographs if the lameness did not improve.

Unfortunately for Marvin, his lameness continued to get worse over the coming days despite treatment. Radiographs were obtained and a small defect was noted in the surface of the radius at the level of the wound. These images were not conclusive for fracture at that time and there was some question as to whether a fracture was present or if a small part of the periosteum (outer bone layer) been damaged. When the periosteum is damaged the blood supply to the bone in that area is compromised and the bone can die forming a “sequestrum”. This dead piece of bone can cause delayed healing and may require surgical debridement. In Marvin’s case, the only way to determine which was present was to allow more healing to occur. When hairline fractures and sequestrums are present, there can initially be only slight changes noted on x-ray. Around 10-14 days after the initial bone injury, bone cells are eaten away to create a matrix for new healthy bone to replace the damaged tissue. This matrix shows up as an increased defect on the x-ray image as the cells are not as opaque as typical boney tissue.

For Marvin, repeat x-rays showed a non-displaced spiral fracture in the radius. Treatment could involve surgical repair or conservative management. Surgical intervention is typically quite costly but is the only option when the fracture is displaced. Even still, prognosis is poor as there is high chance of catastrophic injury that cannot be repaired surgically. When radial fractures are non-displaced, as we saw in Marvin, their prognosis for healing with conservative management can be good so long as the patient can handle prolonged stall rest. A quiet, sensible horse has the advantage in these cases as they are less likely to overload the limb by trotting or playing in their stall while healing. Besides catastrophic injury, there is also the risk of supporting limb laminitis to consider and as such anti-inflammatories and support of the opposite hoof is essential. Luckily for Marvin, he has been an excellent patient and the radial fracture has continued to heal well with stall rest and some anti-inflammatories in the early healing period. It will be a long road before Marvin returns to any athletic endeavors but with continued diligent care by his owners, he has the potential to return to his previous career.

Figure 1. Initial x-ray showing small defect in the surface of the radius near the wound (red arrow). Note that there the chestnut is also overlapping the bone in this image causing an area of perceived irregularity in the bone (blue arrow).

Figure 2. X-ray of the radius 14 days after injury showing spiral radial fracture and boney callous along the outside of the bone consistent with normal healing process.