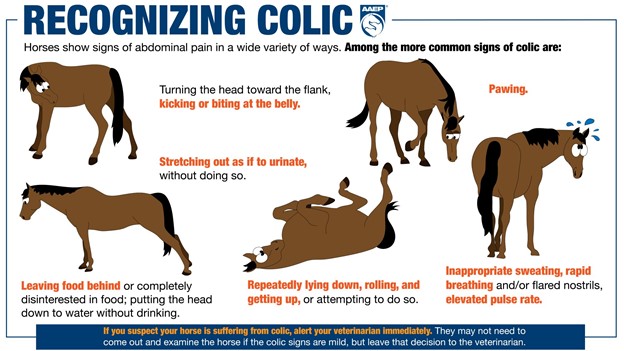 Star, a 10 year old Quarter Horse mare, was found in her paddock early one morning showing signs of colic. She was pawing and trying to roll repeatedly. There were multiple piles of normal manure from overnight, but she had leftover hay and showed no interest in feed. The owner’s sought immediate veterinary care and hand-walked her until the veterinarian arrived. On examination, Star had a moderately elevated heart rate (48 bpm) and quiet to absent GI sounds. She gums were mildly tacky but pink with adequate capillary refill time suggesting mild dehydration. Further diagnostics were discussed with the owner, including nasogastric intubation and rectal palpation. Horses can not vomit and so nasogastric intubation is an important part of the colic workup to ensure that their stomach is emptying properly and provide an emergency outlet if it is not. Rectal palpation can help us to identify abnormalities in the GI tract such as gas distention, fluid filled small intestines, entrapment or displacement of the large colon, or impaction, amongst others.

Star was sedated and given pain control medication (Banamine). She had no gastric reflux (excess fluid) on intubation, suggesting that her stomach was emptying normally. Rectal palpation revealed a large mat of firm ingesta in the large colon consistent with impaction. To soften up the impaction and rehydrate Star, water and electrolytes were administered into the stomach via the in place tube before it was removed. Star was quiet and more comfortable following waking up from sedation. She was kept in a stall for close monitoring, offered a salt block, free-choice water, and a second, flavoured water bucket to help encourage water intake.

In impaction colics, it is essential to fast the horse and ensure adequate bowel movements before gradual reintroduction of feed. The amount of time this takes can vary depending the cause of the impaction, severity, and GI motility. Star was fasted for the next 12 hours and in the evening began to pass firm bricks of manure with some mucous present. The mucous can be a sign of slowed GI transit time. Star was then gradually refed small, soupy mashes and soaked hay over the next 2 days increasing amount slowly until she returned to her normal feed amount.

While the majority of colics respond to this type of management, the type of colic and severity may require further diagnostics and treatment. The key is often early intervention. It is essential to begin communication with your veterinarian as soon as colic signs are observed. Depending on the situation, bloodwork, diagnostic imaging with ultrasound, IV fluids, or other medications may be warranted. In severe situations, referral for surgery is the only option. It is important to be prepared for colic and have an idea of if your horse would have an option for medical and/or surgical care. This helps to ease the burden of making this decision in stressful situations. The Swiftsure Equine team is here to help guide you through these difficult decisions and support you in treating your horse when colic occurs. 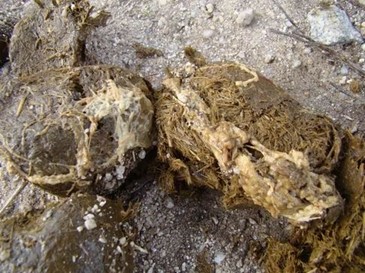